If you hold down the Option (alt) key and click the Wi-Fi icon in the menu bar, it will  provide you with details about your router and the network you're using. The items in gray (except for "Wi-Fi: On") are all pieces of additional information seen only in this mode.

• IP Address: This is your computer's IP address.

• Router: Your router's IP address. You can type this into your browser to access your router's web interface.

• Internet: This tells you if you are able to access the internet or not. If not, open Wireless Diagnostics.

• Security: Your router's security. Most routers on the market offer WPA2 Personal, and it keeps your network encrypted.

• BSSID: This is your router's MAC, or hardware address. It acts as an identifier for your router that lets it talk to other network-connected devices.

• Channel: This is your WLAN channel, and it determines which radio frequency the router uses to transmit information.

• RSSI: Received Signal Strength Indicator measures how well a device "hears" a signal from the router. It's useful for determining if you have enough signal to get a good wireless connection.

• Noise: This measures how much radio noise is interfering with the RSSI signal. Signal-to-noise ratio is a measure used in science and engineering that compares the level of a desired signal to the level of background noise. It is defined as the ratio of signal power to the noise power, often expressed in decibels.

• TX Rate: The transmit rate is the speed of the data that is transmitted between your router and your computer. Right now I have a speed of 450 Mbps.

• PHY Mode: This is the wireless protocol that the router uses, according to the IEEE 802.11 wireless standard.

• MCS Index: This number corresponds to the protocols uses to encode the radio signal. 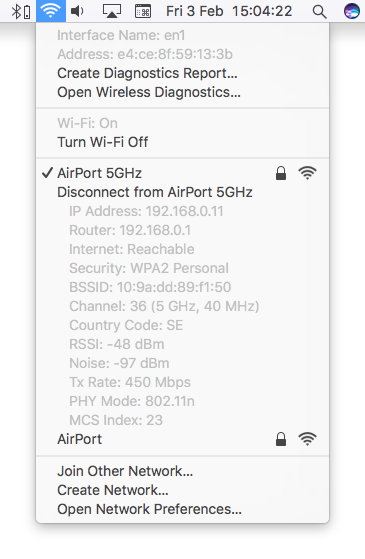