Content caching is a great idea, especially if you have an always-on (or often-on) Mac in your home or office. Instead of having to download the same stuff over and over, you only do it once. Then, any other devices on your network pull their data from your Mac, instead of from Apple's servers. That's probably a boon for Apple's data bills, but for us it could make a huge difference to update speeds. When this feature is switched on, both Mac and iOS content is saved locally.

How to set up content caching in macOS High Sierra?

• Open Sharing from System Preferences.
• Unlock the pane. Click the padlock icon in the lower-left and authenticate.
• Configure the Content Caching service.

• Switch it on. Click the checkbox on the left of the service name to enable it.

Keep in mind that content caching will download all content requested by any client device, so the service will consume vast quantities of storage space unless you limit the storage. You can inspect how much storage space is being used on your Mac by the caching service by clicking the Options button. You can also use Cocktail (Preferences > Caches > System > Content caches) to flush/clear content caches. 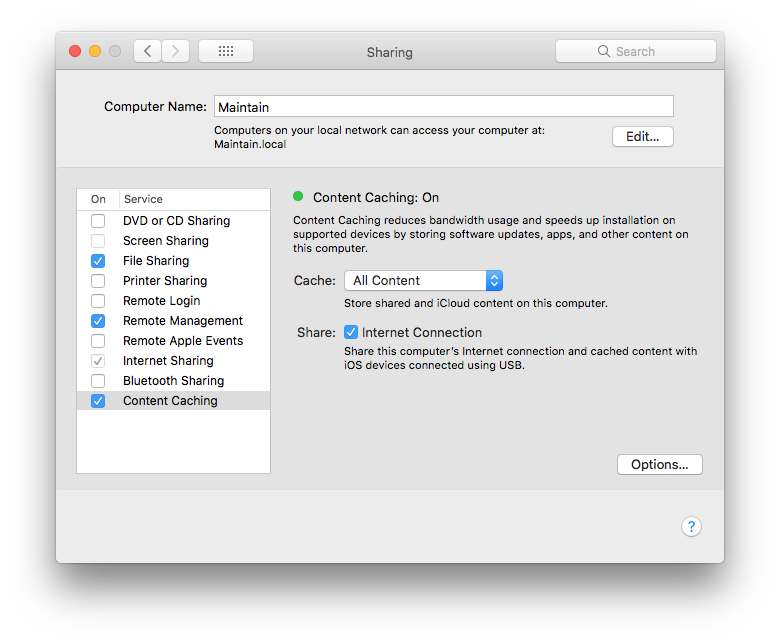 It turns out you can still access all the traditional image format options from the Save and Export panels just by holding down the Option (Alt) key when clicking on the Format menu.

Holding the Option (Alt) key when selecting format reveals all possible image formats. You can use this to convert existing images to different formats, or to save the file as a less common format. 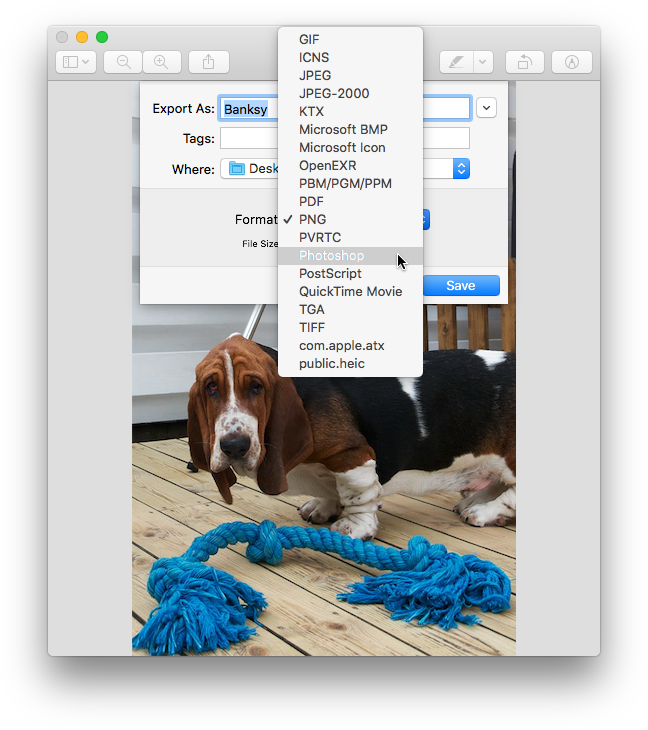 Time Machine drives must be formatted in HFS+ (a file system released with Mac OS 8.1 in 1998 and found on every version of macOS since then). Time Machine uses the magic of hard links, a feature that HFS+ file systems have to catalog and keep track of which files in a backup make up the current version of an app, document, or directory.

APFS, on the other hand, does not support hard links. When you convert an HFS+ formatted volume to APFS, any hard links found during the conversion process are automatically changed to symbolic links, thus breaking your Time Machine backup into a collection of almost useless files.

Luckily, installing macOS High Sierra won’t automatically convert Time Machine drives to APFS, but it’s possible to accidentally change the drive’s format to APFS from within Disk Utility. You’d think Disk Utility would detect the Time Machine backup and stop you, but it doesn’t. You can also convert a drive to APFS without macOS warning if you use the Finder option to encrypt a drive in High Sierra (macOS will convert the format to APFS before encrypting the drive).

Until Apple releases a new version of Time Machine that makes use of the APFS feature set, such as snapshots to replace file linking, your Time Machine backup must remain formatted as HFS+.

The Finder's Go > "Go to Folder..." (Shift-Command-G) menu item is a nifty way to access your file system.

First of all, you can use it to see hidden folders, so if you need to view /private/var, you don't have to open a Terminal window to do so.

Secondly, the "Go to Folder" window is an excellent place to paste a path rather than clicking around to get to a deeply nested folder. I use this pretty often when I'm troubleshooting. After all, if Apple's support documentation tells you to open ~/Library/Mail/V2/MailData to access a file within it, it's very quick to just copy that path and paste it into the window.

To make typing stuff in even faster, the "Go to Folder" window allows tab completion (just as Terminal does), and it tries to autofill as you type, as well. So if you type in ~/Doc and then wait for a moment, your Mac will attempt to figure out the destination and fill it in for you.

Important to note is that you aren't just limited to using "Go to Folder" within the Finder itself. The same keyboard shortcut can be used to invoke it within Open/Save dialogs, too. 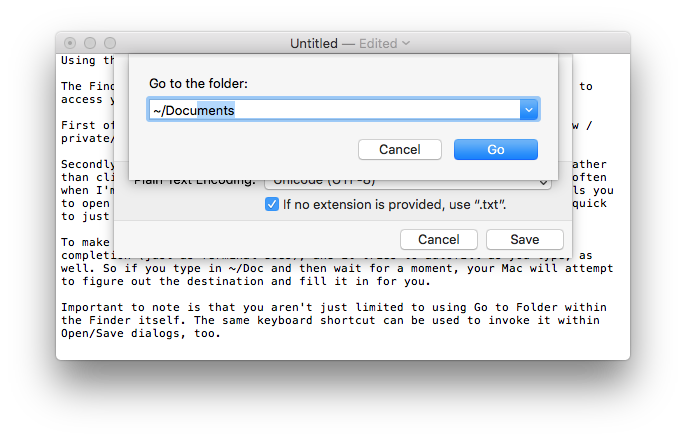 Please note that key names are separated by a hyphen (-), such as "Control-Eject". You do not type the hyphen as part of the key combination.

Control-Eject
The dialog box "Are you sure you want to shut down your computer now?" appears with options to Restart, Sleep, Cancel or Shut Down. After the dialog appears, press the R key to Restart, press the S key to Sleep, press the Esc key to Cancel, or press the Return key to Shut Down.

Control-Command-Eject
Quits all applications (after giving you a chance to save changes to open documents) and restarts the computer.

Control-Option(Alt)-Command-Eject
Quits all applications (after giving you a chance to save changes to open documents) and shuts the computer down.

Command-Option(Alt)-Eject
Puts the computer to sleep.

Shift-Control-Eject
Puts all displays to sleep.